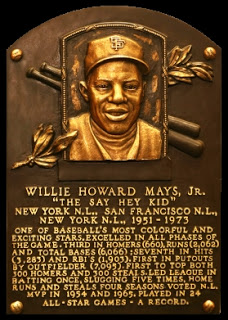 Commissioner Rob Manfred made the announcement Friday on the 63rd anniversary of Mays’ over-the-shoulder catch (and magnificent whirling throw to the infield) that robbed Vic Wertz and created momentum for a four-game sweep of the favored Cleveland Indians.
“Major League Baseball is thrilled to honor Willie Mays on our game’s biggest stage and in a manner that befits his many contributions to the sport … This annual recognition will forever celebrate the life and career of a legend of the national pastime,” Manfred said.
Mays issued a statement thanking Manfred and MLB and added, “Baseball has always taken care of me, and for that I am grateful. I think it’s just a wonderful thing to know that at 86 years of age, I can still give something back to the game. I am proud to lend my name to this important award. What a day this has been.”
Also Friday, Mays had a street named after him near the Polo Grounds site in New York. The northeast corner of 155th Street and Harlem River Drive now is Willie Mays Drive.
The Giants have had three World Series MVPs: Edgar Renteria in 2010, Pablo Sandoval in 2012 and Madison Bumgarner in 2014. Last year’s MVP was the Cubs’ Ben Zobrist.
“That’s a really cool honor for him and for all of us to see the MVP named after him,” manager Bruce Bochy said. “It’s going to remind people who Willie is and how great a player he was. I’m sure the player who receives the award, it’s going to mean a lot to him, having an award named after Willie Mays.”
Mays, 86, played in three World Series with the Giants (1951, 1954, 1962) and one with the Mets (1973). He was inducted into the Hall of Fame in 1979, voted by fans as one of the four greatest living players in a 2015 promotion and received the Presidential Medal of Freedom from President Obama.
John Shea is The San Francisco Chronicle’s national baseball writer. Email: jshea@sfchronicle.com Twitter: @JohnSheaHey